Review by the awesome Michael Britt

“Mortals are weak and prone to mistakes; do not measure us by our worst, but rather by our virtue. In a world where we have many reasons to be evil, some choose goodness.”

Shadow Crucible is such a strong debut novel! I’m not even sure what I could compare this to. It’s almost like a historical fiction with fantastical and paranormal elements thrown in.

There still tends to be the stigma surrounding independently published books. This book blows that stigma out of the water. I tend to keep my reviews spoiler free, so I’ll try and keep this as vague as possible. We follow a few characters in the book, 2 more so than the others, and it’s set in the medieval gothic era of London. The 2 main characters of the book are Count Mikhail, a Knights Templar, and Estella, a seer. As you can probably tell, these 2 characters couldn’t be much different. While I really enjoyed them, I think I might have enjoyed some of the side characters more. Mainly Antariel, but stating the reasons would be major spoilers. We also get a really great cast of angels and demons, which is what grabbed my attention with this book in the first place. And Lakomy sure gave us some major players! We’ve got Lucifer, Samael, I think Jesus makes an appearance, and some of the Archangels. My favorite scenes were, by far, when any of these angels or demons made an appearance. You just knew something was going to go down!

Luckily, there wasn’t much need for world-building. Some like it, but I’m picky on my world-building, so it’s nice when it’s pretty much already done for us. But what I did love was her ability to set scenes up. She’s able to make our surroundings vivid without giving us 2 pages of extensive and useless descriptions. Which seems to be something that some authors, understandably, find kind of tough. This definitely has a dark feel to it too, which I absolutely loved! This is pretty much what I pictured throughout the book: 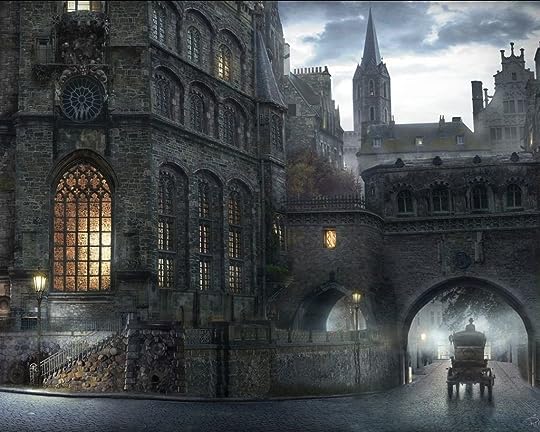 I did have a few problems with the book, though. It obviously wasn’t anything that ruined the novel for me, or my enjoyment, but I do feel that they’re things worth addressing. Some of the action scenes tended to happen really quickly without much of a segue from it being a calm setting into the action. It wasn’t something that happened often, but I did have to go back and reread a few scenes. The other thing was actually part of what I liked. I didn’t really connect as well with the main characters as much as I did with the side characters. So I look at that one as a strength and a weakness. But I also tend to gravitate more towards side characters in every story I read, so take that for what it’s worth.

All in all, I was extremely happy that I picked this book up! It had so many elements that I really enjoyed. If her debut novel is this strong then I can’t wait to see her future works as she grows as a writer! Definitely recommend for anyone who loves a real life setting with some paranormal and fantasy twists to it.

One thought on “Guest review ~ T.M Lakomy – The Shadow Crucible”