Why have I waited so long to read this?
There will be spoilers in the section that discusses characters – so please tread lightly!

Gardens of the Moon, The first entry in the Malazan Book of the Fallen series is best described as a convergence. The tapestry weaved by Erikson is something I am both amazed by as a reader and envious of as a writer. I now know another level that I hope to achieve and as my friend stated recently, I may have to rethink my rating system for other books.

I began my journey into the Malazan series in a similar manner that I’m sure some others have. I call these the Seven Steps of the Seven Cities (Made this all up on the spot actually cause I don’t like to prepare or plan for things.)

Skepticism – Surely I’d fall on the side of those who didn’t like this. The reviews are so polarising.

Fear – So many people talk about how difficult this series is. I don’t have the time or energy for that.

Envy – All of my friends are reading or have already read this. Am I really going to be the only one who hasn’t?

Interest – Oh man, this world sounds so interesting…maybe I’ll just read the first one… I feel like I’m missing out.

Acceptance – Look. We all know I’m going to end up reading this so just start it already.

Amazement – This book is incredible. Why haven’t I spent my time in this world until now?

Adoration – I will devour the rest of this series because it’s already one of my favorite worlds, even though I’ve read 1/10th of it. (Without counting Esslemont’s contributions!)

To be honest, I only experienced the “wow this is overwhelming” feeling that lots of people talk about when bringing up getting into the Malazan universe for about the first 50-100 pages. After that, the author does such an amazing job at placing clues, leading the reader where he wants them to go without holding their hand or spending 1,000 pages telling you about the world. It was a beautiful thing and I felt like I got more out of each 100 pages than I’d on average get out of 300 in another book. These numbers are just estimates of course, but the amount of content I had to talk about with friends after each chapter was just astounding.

The world was rich. There were histories upon histories, incorporating beings of immense power. I felt that Erikson did a fantastic job at portraying the various power levels of individuals, explaining their weaknesses and still making you fell in complete awe at the creatures and beings that call this world their home. I just wanted more and more of the Lore. I want more information about the Bridgeburners, the magic system – warrens, on the different races such as the T’lan Imass and the Tiste Andii. I wanted a “guide” or something that I can take to work and read instead of doing real work.

I didn’t feel like there was a main character. This wasn’t the “coming of age” tale of some hero or the story of how a legend came to be, rather this was the story of the entire world and the pieces that came to play on it, all moved by their masters and the forces that willed them. Characters that you met were already who they had become, and I was able to easily understand and appreciate them without needing to be detailed their entire history. Although, I definitely want to know them all at some point. If this isn’t proof that I loved this book, I don’t know what is. This was due to Erikson’s masterful writing and understanding of imperfect people who embraced their flaws. It was a breath of fresh air.

Let’s talk about the most badass character that I’ve read about in a long time, if not ever. 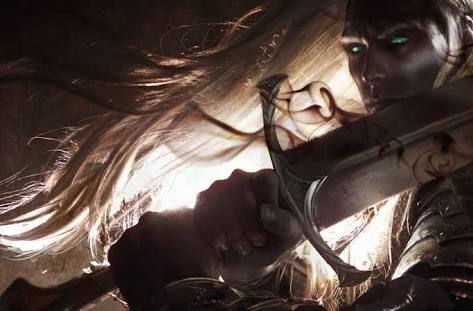 I felt his power when reading of him. Erikson did an incredible job with all of his scenes and portraying such powerful characters. I could almost feel the pressure of the sword when looked upon, and hear the wagon and the chains. If there’s one character I want to read more and more about, it’s Rake.

Quick Ben
Probably the second character I want to know more about. Seven warrens can be used by him at one time and he is an ex-High Priest of Shadow? Where is this guy’s past and how do I get my hands on it? He was funny, exciting and powerful.

Whiskeyjack
Here is a man who has become so numb to death and killing that he no longer questions it. It’s always, I wouldn’t say fun, but interesting to read about characters like this and how they handle themselves. I would say that occasionally I thought of him as similar to how I felt about Dalinar in the Words of Radiance.

Paran
Paran’s story is probably the one you read about most, as he is in the beginning and you follow him throughout. I think it’s pretty awesome that he now carries Lorn’s Otataral sword and I hope to learn more about how the anti-magic works in future books. Paran is interesting in the decisions he makes and also his love for…

Tattersail
“Tattersail smiled. “The only death I fear is dying ignorant.”
Holy crap. Did that really happen? Did she kill her body to and become a baby again? She is far more powerful than I thought she was initially and was very good at playing the part. Can’t wait to read more about what happened with her and if she will be reuinited with Paran.

There are dozens of others that I loved. Kalam (I want to see his anger unleashed), Sorry (What is going on with that witch inside?), Crokus (Tossing the coin in at the end was pretty awesome), Rallick (Otataral inside of his skin? How powerful is he now?), Tool (Lots of feeling and emotion for a supposed three hundred thousand year old creature), Toc  (The scratchy eye and visions through the Warren? Where did you go my friend?), Lorn  (I loved her chapters, though I am not “sad” to see her go. If she truly stays dead.)

And let’s not forget…

Kruppe!
Oh man I had mixed feelings about this guy. At first I couldn’t figure out who was playing who, but towards the end I started to see his real power and motives and ended up with positive feelings about the fat, dreaming bastard. His third person talking perspective would be so annoying if I had to listen to it in real life xD.

This world was massive and so detailed. I felt like the 700 pages were actually several thousand, and often found myself asking; “Did I really only read one chapter?”. I both wanted to savour every page and devour it at the same time.

To anyone asking, should I delve into a world so large and with 10 books in the series?

100% yes! In my opinion, it is not as intimidating as some people make it out to be and I think you’ll not only enjoy it, but love it. I’ve been told that Gardens of the Moon is often thought of as the “weakest” in the series. If that’s the case, then I’m in for enjoying the best books I’ve ever read.

If not, and it simply is not the style for you then all the better, at least you will know and have had a chance to taste the delicious fruit that is Malazan.