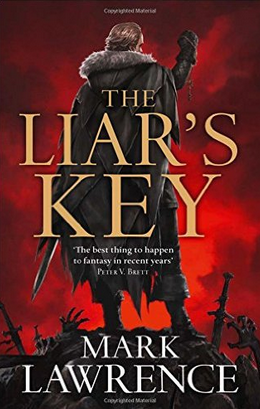 The Liar’s Key is the second book in Lawrence’s The Red Queen’s War trilogy. I adored Prince of Fools which followed Jalan’s escapades across The Broken Empire and therefore picked up this book as soon as I could.

The survivors from the quest to the Black Fort are Jalan, Snorri and their fat honorable Viking friend, Tuttugu. They have within their possession a magical key, known as Loki’s Key and this can open any door, yet there is a lot more to this artifact than just that point.

Snorri, the honourable Norse warrior, is a man on a mission and will do anything to find information about where Death’s Door can be found. His only aim is to rescue his dead family from beyond the grave and if he follows through with that ambition, he is setting himself up for a war against the armies of the deceased to achieve this. The Dead King and his minions are already tracking the group and the key. Jalan, however; wants to get himself back to the comforts, whores, drink and debauchery of Red March.

At the time of publication, this was the longest book that Lawrence had written. Unfortunately, because of this, slow traveling across the land segments drag on sometimes. These parts made this story not as “unputdownable” as the first. However, when a high octane action sequence comes into play, it often has been built up well and then the events blow the metaphorical doors of the hinges story wise. So in hindsight, the pacing “issues” lead to the last fifteen percent being breathtakingly well executed and a pleasure to read. The narrative is set up perfectly for the next book and it ends with a cliffhanger of sorts.

While the characters traverse the thousand or so miles of the world again, some new cool additions are introduced who play crucial parts. Examples being a young, intelligent beyond his years orphan, called Hennan, who the cast meet whilst flirting dangerously close to the Wheel of Osheim – and Kara, an attractive young witch who they cross paths with when they are trying to find details about their destinies. Ah, yes. Jalan fancies her. A diverse fantasy fellowship of sorts is created.

We still follow Prince Jalan of Red March’s monologue and it is a pleasure to be in his mind. In times of pressure or struggle his enthusiastic initiatives are great to follow. It is comically written to perfection as he is still the same wealthy coward, liar, and a scumbag. To heighten the depth of the history and the politics of the world, we are presented magically influenced flashback sections in which Jalan is able to open his locked and hidden away memories of his youth. A number of these scenes are tragic but highly insightful. Yet, some of the current day scenes also contain a fair amount of violence including descriptions of torture which I know is a faux pas in some readers eyes, but necessary to the narrative. Furthermore, following these dreamlike visions, he is slowly changing as a person with perhaps slightly different priorities now. These visions lead to him realising who his ultimate arch enemy is. (Do people still have arch enemies these days?) In this already information brimming book, we also find out about the early days of the Red Queen, Silent Sister and Blue Lady which relates to the start of The Red Queen’s War and gives insight to who is on which side of this Chess Game of potential destruction, what each master of the pieces hopes to obtain and also where the players currently find themselves.

I thought this story was great, the ending, the character building and the set up for The Wheel of Osheim are expertly composed. I do rank this slightly lower than the first because Prince of Fools was full of nonstop often comical action and it was a new approach for writing fantasy and how to present a hero. This seems deeper and I think the final tale will benefit from the direction Mark is taking. Highly recommended.

Buy at:
Amazon UK
Amazon US